Joelle Lester, Dr. Valerie Yerger, and Doug Blanke at FDA Headquarters hand-delivering the original petition calling for the FDA to ban menthol in cigarettes on April 12, 2013. Lester and Blanke are with the Public Health Law Center; Yerger is part of the African American Tobacco Control Leadership Council.

Mitchell Hamline’s Public Health Law Center (PHLC) celebrated a key victory in 2021 in its long battle to stifle the sale of menthol cigarettes.

The Food and Drug Administration (FDA) announced in April 2021 that it would issue rules banning menthol cigarettes and all flavors, including menthol, in cigars. This decision was a direct, albeit long overdue, response to a formal “citizen petition” drafted by PHLC and joined by 18 national organizations, including the African American Tobacco Control Leadership Council and the Center for Black Health and Equity.

This petition was first filed in 2013, when PHLC staff delivered several bank boxes to FDA offices in Maryland, each containing a copy of the petition and a thousand pages of scientific evidence establishing the harmfulness and addiction to menthol flavored cigarettes.

“Such a significant change is taking far too long, but this is a truly historic agreement,” said Doug Blanke, Founder and Chief Executive Officer of PHLC. “It’s a testament to a handful of visionary racial justice advocates and our own dedicated staff, forcing the federal government to do the right thing, despite bureaucratic inertia and the power of Big Tobacco.”

This article first appeared in the Spring 2022 issue of Mitchell Hamline Law magazine.

Still, even with the move, Blanke says menthol products could still be in stores for another five years, given the slow agency and tobacco industry litigation.

Blanke praised the continued efforts of PHLC staff members on the menthol ban, including Natasha Phelps, senior attorney for Minnesota programs. The goal is to improve public health and advance a commitment to equity that PHLC shares with Mitchell Hamline, which became a completely tobacco-free campus in January.

Banning menthol cigarettes is one of the most powerful actions the FDA could take to improve public health in the United States, where smoking is the leading cause of preventable death, according to the petition. “Menthol cigarettes are the source of addiction for nearly half of all teenage smokers,” he continued. “Menthol increases the taste of smoking, particularly in young people and members of racial and ethnic populations, and menthol increases the difficulty of quitting.” 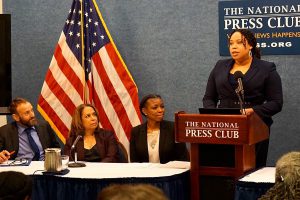 Natasha Phelps of the Mitchell Hamline Public Health Law Center speaks during an event on the plight of Black Americans and menthol tobacco products at the National Press Club on May 23, 2019. Seated to her right are (L-R): Laurent Huber with Action on Smoking and Health; Sharon Eubanks, former Justice Department prosecutor; and Channte Keith of the National African American Tobacco Prevention Network.

The Tobacco Control Act of 2009, which gave the FDA the power to regulate tobacco products, left menthol as the only flavor still allowed in cigarettes. Desmond Jenson, the PHLC’s lead attorney for federal regulations, called it a “racist exemption.”

“It’s the most important flavor in cigarettes for the tobacco industry for non-addicted users,” Jenson said. “You can’t overstate how excruciating it is.”

“It’s exciting to have the opportunity to advance equity in a meaningful way,” she said. “This is a social justice issue that has been led by incredible African-American leaders.

“And we won’t stop until menthol cigarettes are out of the market.”

This article was written by Todd Nelson, a freelance writer in the Twin Cities.